Do NOT, I repeat do NOT, believe everything you read.   This article is a case in point:

“PET owners beware — new research has revealed that dogs don’t like hugs from their owners, which can make them (the owners?) more stressed out.”
“According to new research published in Psychology Today, Stanley Coren from the University of British Columbia, said dogs respond differently to humans who seek comfort from hugging others.”
“Coren, who studies canine behaviour, analysed a random sample of 250 pictures of humans hugging their dogs that he could find online through Flickr and a Google image search.” (skewed data – he left out Pintrest and Instagram where the animal pictures are more photogenic)
“In using photos where the dog’s face was easily seen, he looked whether the dog appeared to be anxious or distressed, relaxed, or showed a neutral response to being hugged.”
“He found that around 82 per cent of the photographs showed “unhappy dogs” receiving hugs from their owners or children.” 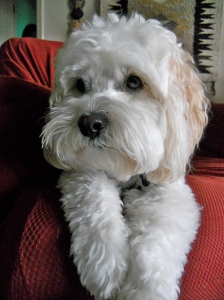 He said that dogs show signs of distress when they bare their teeth (called a smile when humans do it), turn their heads away from something ( just being bored and looking around), or they partially close their eyes (doesn’t everyone close their eyes when ecstatic?).
Another sign of anxiety is when a dog’s ears are lowered or “slicked against the side of his head”. (Stanley, it’s just our coiffure)
He also said that licking lips or licking a person’s face can also be a sign of anxiety, like yawning or raising a paw. (I lick when it’s tasty)
Coren said the fact that dogs don’t like being hugged can be explained by their behavioural nature.

As “cursorial animals”, (cursorial?  I swear I never curse) they are designed for swift running. When stressed, a dog’s first instinct is to run away.
It is believed that when they are restricted from moving with a hug, it can increase a dog’s stress level and potentially cause them to bite their owners. (or bite researchers)

It’s not the hugs that stressed the dogs out it was having their pictures taken WITHOUT THEIR CONSENT to be displayed for all the world to see. 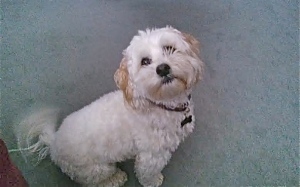